SlideShare is the world’s largest community for sharing presentations. It allows you to share information with millions of viewers or privately with colleagues. Take any type of presentation and add audio or insert videos to create an online, sharable audiovisual arrangement of your information.


SlideShare lets you connect with people who have interesting content to grow your professional network. Find people in your key networks that have a SlideShare account and reach out to them.


It's a great tool to facilitate content marketing. The more content you add to your SlideShare, the more visibility you will generate which will lead to more page views. Generate business leads by sharing your newly created SlideShare via LinkedIn, Twitter, or Facebook.


Tips for Success on SlideShare


§  Start with an interesting topic; offer something your target audience will find useful


§  Use high-quality images and keep text to a minimum


§  When using text, be sure to use bold subheadings to break up blocks of text (lay off dense text and save that for blog posting)


§  Links are disabled on your first three slides on SlideShare to ensure the publishing of quality stories, fascinating content, and insightful information


Connect with me on SlideShare! http://www.slideshare.net/jocelynmurray66
Posted by Jocelyn Murray at 10:37 AM No comments: 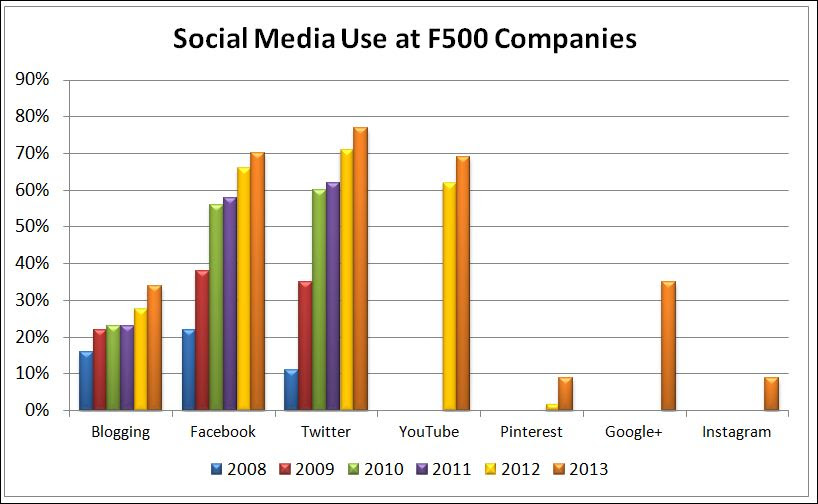 After several years bumbling around on social media, Fortune 500 companies are seemingly climbing aboard and approaching the usage levels of their more nimble INC 500 brethren.
That is one of the conclusions of a new report out of the University of Massachusetts Dartmouth Center for Marketing Research. The center has been conducting this type of research since 2008. A few of the report highlights:

77% of the Fortune 500 companies have an active Twitter account, leading all other social media platforms. This is an increase over 70% in 2012.
The Wall of Shame: Five of the 2013 F500 companies had Twitter accounts with no activity on them: CF Industry Holdings, Joy Global, Laboratory Corp. of America, O’Reilly Automotive and Omnicare.

348 companies (70%) are now on Facebook. This represents a 4% increase since last year. Nine of the top 10 companies (WalMart, Chevron, Phillips 66, Berkshire Hathaway, Apple, General Motors, General Electric, Valero Energy and Ford Motors) have Facebook pages. Exxon does not.
The percent of corporations with Facebook pages varies by industry with Retail (96%), and Telecomm (88%) leading the way. Utilities (44%) and Automotive (40%) are laggards.

Pinterest has grown in membership since its public debut in 2010 and is showing up in the F500. In 2012, 11 (2%) F500 companies had Pinterest accounts. This year that number has grown to 45 companies or 9%. Half of the top 10 ranked companies have Pinterest boards.
69% of the F500 have YouTube accounts, a 7% increase from last year. YouTube is as popular with the F500 as Facebook. Berkshire Hathaway is the only company ranked in the top 10 without its own YouTube channel.

Google+ was included in the study for the first time. Although 35% of the F500 have accounts, more than half of them are inactive. The university noted that this is the only platform where companies generally have accounts but no activity.
Any comments or surprises on this data?
Source: http://www.businessesgrow.com


Posted by Jocelyn Murray at 12:33 PM No comments:

Your Online Media Kit: What to Include and Why


Posted by Jocelyn Murray at 8:45 AM No comments: